One of the things that concern most guys thinking of adding height is avoiding being detected. Over the past five years, more write to me about this than anything else. Clearly, ensuring that no one will ever know is a number 1 concern. 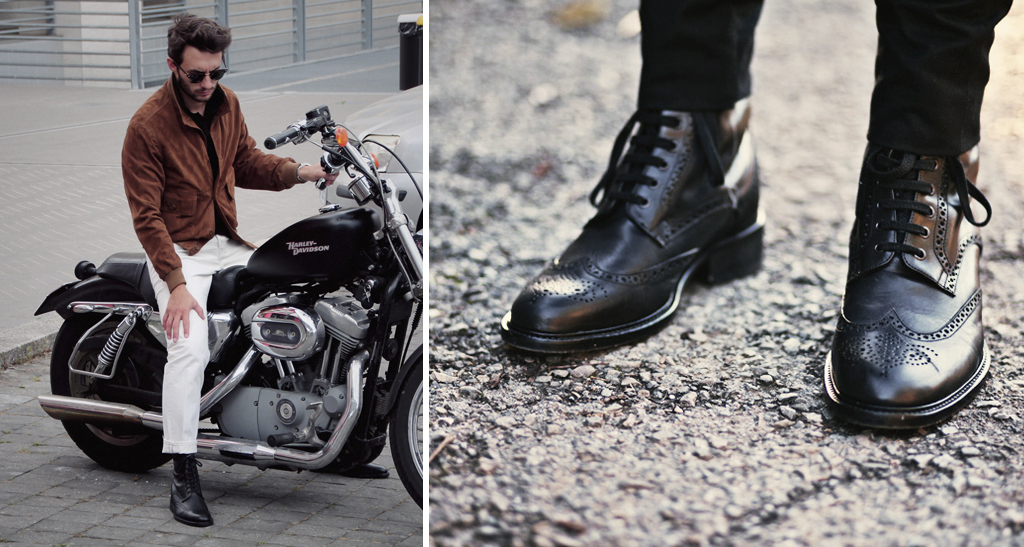 So in this piece I am going to bring you the stories of three different guys: now I have changed the names for confidentiality so let’s call them Richard, Marlon and Dean – all the other details are exactly as they are: all of them had as their primary concern “will I be found out?” – all of them I have been in touch with since my first article on here, pretty much half a decade ago. And I have been in contact with all of them again over the past few weeks to ask about their journey upwards through height addition… and here’s what they say about their four or five years’ experience of adding height from that angle.

Firstly, it is clear that the desire to avoid being revealed is as great as ever. It motivates almost every single guy and is a barrier to many from even setting out on the journey. This is a shame because if you follow certain rules, it is pretty certain you will avoid being seen to add height. Here is what the guys have to say.

Dean had toyed with elevators for several years but always hung back. “My real problem was that all the drawbacks, every single one of them, revolved around the degree to which I could guarantee discretion,” he says. “How much added height? The style and colour? And all the little unknowns that could lead to sudden discovery. For many years it was all too much for me.”

Dean was one of the first guys to get in touch with me half a decade ago after I posted a number of things online about my own experiences. And even then it took him another two years till he took the plunge. “Was there a specific single reason towards the end of that time why you waited?” I asked him. “Well I work in an office, am a bit of a planner in my life, and in the end I had to some degree eliminated from my list all of the stuff that concerned me about height and colour. It was going to be a simple and standard type of shoe, black, straightforward, classic, with 3” elevator and ‘let’s see what happens once I am used to those’.  I realised I could wear them to work or to a party with casual pants. The final thing holding me back was simply – would I put them on and would everyone say OMG what happened, you are WAY taller. I just could not bear this”

So what happened. “Well I read your article saying about people not being very observant and took the advice to try it out and add a couple of inches into some oversized sneakers I had bought and never really liked. I wore them around the home, to my mum and dad’s place, to my ex boss’s place for a casual barbeque. Not only did the sneakers themselves without lifts add an inch or so but the two inches I had added by way of lifts were not noticed by any single person. In fact, you will think this is funny but I almost felt cheated! I knew I was/felt a lot taller (my perspective was different enough) but I had to pinch myself over it. No one at all noticed.”

Advice? “Don’t hang back like I did. Yes make totally 100% sure you read all the stuff posted (your stuff on the GuidoMaggi site helped), but also spend a little time beforehand adding lifts. It’s handy if the footwear is larger than your normal size as you can simply add more. Even if necessary buy some cheaper normal shoes a couple of sizes too big (old boots in charity shops/thrift shops are good) and just wear them out and about with as much lifts in them as is comfortable. Lifts aren’t as comfortable as elevators so don’t judge them on comfort, just on whether anyone notices. They won’t. That was what did it for me. I have never ever had any issues at all, I bought a 4” (10cm) pair later but I do not think I would go for 5” or 6”.

Marlon was determined to add height and lifts were just not enough. At 5’8” (172cm) he works in sales and was determined to go as high as possible. “I really want to just get to about 6’ tall and I LOVE some of the bigger boots with chunky soles as I wear that kinda thing anyway outside of work, but was I concerned that these might not look right with my need to be smart even if casual when selling. Since I was 21 have I worn lifts, a couple of inches max and they were never that comfortable”.

“I wasn’t too bothered about detection at work because I meet new people all the time and liaise with an office when I need to. I had decided that I could never jump straight in with 5 or 6 inch boots but I did like the look of the flatter soles on the 4” styles and realized they could be used for work or play. I quickly realized that when people don’t see you all the time they really do not remember detail.”

“What really bothered me, though, was that I lived in a flatshare in Glasgow with three other guys, and you know what it’s like, casual is the order of the day and I kept thinking it would all be too obvious yoyo-ing up and down in height.”

So how did you deal with this? “Well I DID get some elevators, and I went for the 4” Dallas brogue-style boots that have worked very well for all occasions. Because I had worn lifts for some time, this minimized the sudden shock of a whole 4” extra, but I was surprised that none of my flatmates really gave my height a second thought. Of course I make sure I do not go barefoot at home, but I never particularly liked doing that anyway.

“Above all they are comfortable so they can be worn easily. Having bought these and realizing what I could get away with, I then bought the GuidoMaggi standard black Chelsea boots, which I now on reflection would have bought first.”

Advice? “Well, now I am about to buy my third pair. Still wearing my first two and they have lasted forever as they are such good quality. But my third pair is going to be my ultimate desire – a 6” (15cm) pair of total self indulgence. I am glad I did not jump straight in to buying a chunky soled 6” pair. The reason is that at the outset I would have felt awkward and might have hung back from wearing them other than on nights out and then really emphasized I had “added height”. This way. over a few years I have gradually built my height, stuck to my own style and really not been aware of anyone being aware. If you are in any way unsure, then a period with small lifts followed by 3” boots or shoes is totally and completely undetectable. Buying elevators was the best decision of my life, style-wise. 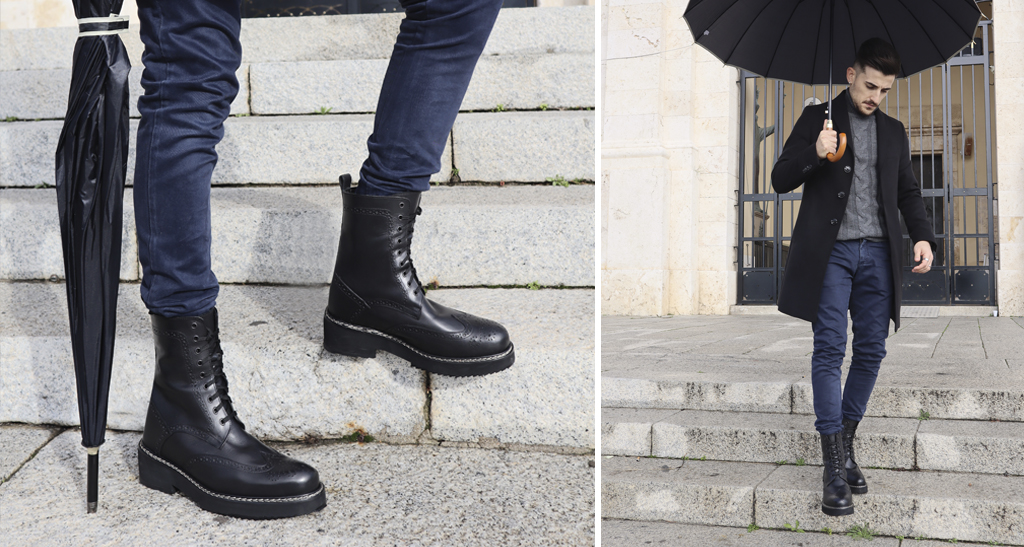 Richard is a fashion assistant working in London but travelling as lot. He first got in touch with me as an already-tall 16 year old starting out in fashion and wanting to add height. He has more choice in style than most, but still hung back a bit at the outset, fearful that people might realise he was adding height. “I work on shoots,” says Richard, “and I’m tall already, and there are two situations that govern my life. I have to be very mobile and active, running here and there. And stylewise, I have a bit of a thing about serious height and like to be guaranteed taller than other blokes around. I have always been like it and even added height ramming socks in my biker boots when I was a xv tall skinny 12 year-old!!

“Because I am quite high fashion, I could in fact wear anything from the GuidoMaggi range and my instinct right at the outset when I got in touch with BigRob was to go for the 5” boots (12.5cm), which at the time were the highest available. This would take me comfortably to over 2m but I was a bit unsure about how actually comfortable I would feel. But anyway I’m in fashion so the look came first and I passed on the 4” option and went straight for the 5” (12.5cm) option (!) in the Bengals, a kind of biker boot.

“I have always wanted to seem naturally very very tall but have no problem with chunky soles – if you wear them with the right stuff and know how to carry it off you can wear them with all sorts of jeans and pants.”

But for Richard the ultimate main issue was detection. “In spite of being high fashion and happy to have big chunky boots below my skinnies, I did NOT ever want anyone to think I was purposely adding height. And I have to tell you it has NEVER been an issue at all. Not at home or at work. You need to always make sure you carry it off well, for me it’s the great confidence in looking so much taller and also do not do anything crazy like taking boots off in situations or leaving them lying around”.

Richard decided to go for another pair – the 5” sneakers – quite recently, and had kept hold of stuff like his outsized army boots that he could shove lifts in at times. Just to change it up a bit.

“Even at my height I realized I needed to make sure there was not a sudden drop any time I was not wearing my one pair of pretty high elevators. So the army boots with a few inches of lifts, the 5” sneakers. All really contributed to protecting the integrity of my height. When I have saved up more I will get another pair, this time a 6” pair and most likely the Laurel Canyon style.

Advice? “Be confident, it’s your style and life. Make sure you try to be organized about it by keeping the added height out of the way of prying eyes, and as someone in fashion, I say ‘go for what suits your lifestyle very time’. What suits me will not necessarily suit you. Buy what suits you and you can get away with more and with greater discretion than if you buy something simply because it adds height. Quality every time because that does the trick, lasts and looks like you have a hot pair of boots on rather than something designed for a purpose.”