I’ve often mentioned the general reasons for guys wanting to achieve certain heights – eg “I want to get to average height” – but it often takes some specific thing that makes them take the plunge. I have recently spoken to a number of guys to find out if specific things have happened to them that spurred them to add height. Like something at work, something when out socially or a family event. And then how it turned out. Did they achieve what they wanted to. Here are two of the stories, in their own words.

I am 28 and three years ago got married. I am a reasonable height at 5’11” (180cm) but my then girlfriend (now wife!) is tall at 178 and I think you can guess what is coming. Our wedding and her family. I had only rarely met her three brothers and they are all very very tall, kinda 6’3” (190). At the start, and on each occasion I thought they might be around, I had worn stuff like my heavier thicker-soled boots with an ever increasing number of lifts.

I have a big collection of Redwings, like the loggers and safety boots. Adding 2 inches (occasionally more! ouch) of lifts to them got me right up there but it was very uncomfortable. I mean really bad! And no way could these be worn at anything like a wedding!

So almost immediately the date was fixed I decided I had to go for it NOW or I would simply be stood there in flat flat wedding type shoes and no time to at least try something.

Firstly I tried to get some standard formal dress shoes from a local store maybe with just the hint of a slight heel, and then add lifts. OK, but it was literally a small extra and even buying a size or two larger I could only get max max 2” of lifts in. And yes uber uncomfortable. I wear fashionable stuff and could indeed get away with something with proper heels like Cuban heel Chelsea boots– and there are some really nice boots around. But somehow this seemed all wrong and for me a bit like trying to add height at the altar through high heels.

And I am glad I changed course. I looked at the specific GuidoMaggi wedding/dress shoes but wanted something a little less formal – and I found their superb 4” (10cm) Chelsea boots on GuidoMaggi site. 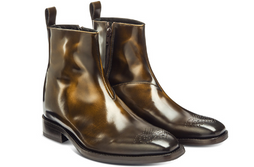 I bought both the Marylebone and just in case I was going to go in a slightly trendier suit in my style and colours, the Arles style Both 4”. 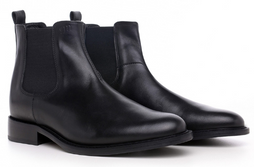 Neither have ‘high heels’ as such, like Beatle boots, just the usual type of heel. Nother likely to draw comment at all. In the end I did wear me more modern suit with the 4” Arles boots and OK I admit I added a little extra by way of a lift as well.

But I achieved absolutely what I wanted 100% and the boots themselves looked flat and without any hint of what was inside giving me those extra inches. On the day I was possibly even a tad taller than those other tall guys, no one suspected a thing and I felt it was totally my day. It inspired me to go higher afterwards with some 6” boots that I now wear in all casual situations.

Until the pandemic hit, I worked for ten years in a very casual design office. No one ever wore a suit, it was jeans and t-shirt and we all knew each other well: although in an ideal world I had always wanted to be taller, it was never something I thought to act on. A load of us then worked from home after early 2020 but it was never something that really worked properly in spite of the hype.

So as we came out of it, it encouraged me to look around for a change. In the event I stayed in the same field but I became aware when meeting people (in a big city) that I was in fact shorter than many, although that itself did not overly bother me: but actually at the new company it was entirely different and for some reason I found myself much more aware of dealing with a whole gang of taller guys. And in a very positive way I began to think about wanting to be taller.

A slightly infuriating thing was that some of these guys actually wore very thick chunky sneakers or even boots with heels and this made me very aware that I was doubly dipping out!

So in my case, as a shorter than average guy, it was seeing other guys’ footwear that made me want to add inches. Guys who were taller than me not so much necessarily adding height via elevators or even purposely ding it, but nonetheless adding height and in the region of a couple of serious inches.

Now I got a serious buzz when I actually went out and bought the specific pair of sneakers that one of the other guys wore – I myself felt way taller. But I was only two inches up and no one was even slightly aware.

Hmmm, I then was just a bit thoughtful as to how much further I could go in comfort. And I had always had an absolute horror of elevators. They seemed like a real no no. But when I looked at the range of styles, I realized that in fact most are now simply well-crafted versions of ‘normal’ footwear, if that’s the right word.

Having started to wear my chunky sneakers etc, I added a small lift and then when I bought my 4” sneakers from GuidoMaggi, it was truly amazing that no one at all had the slightest idea I was adding height. There is no way that I would want to go for much higher, just because I am not sure I would feel comfortable in them.

So for me it was, as a shorter than average guy, seeing taller guys wearing footwear that gave them an advantage, wanting to copy and then branching out into elevators. And the experience has worked 100%.