I was on a flight at the weekend and saw two guys wearing Chelsea boots in the airport lounge, and I just thought “how cool they look”. And how timeless – somehow always in style. 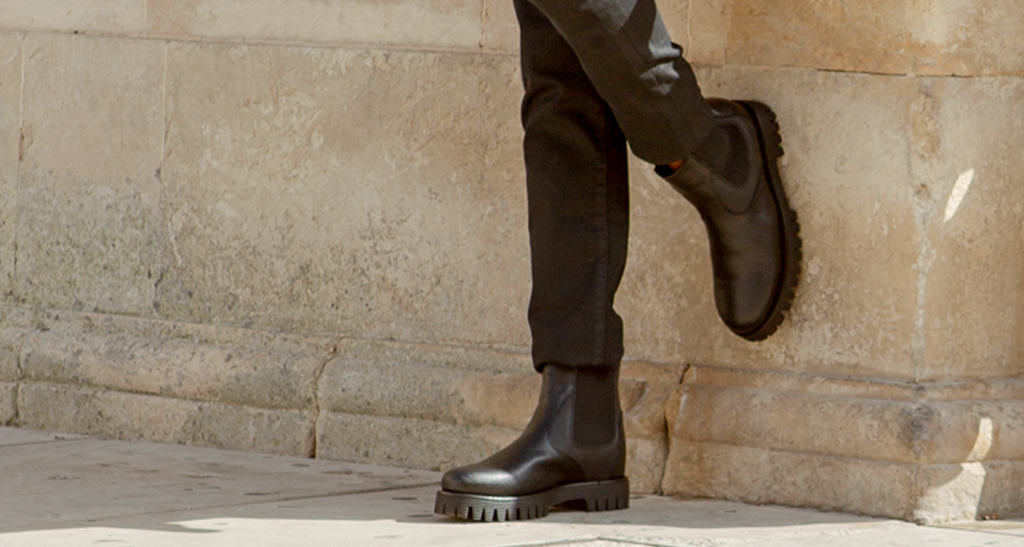 I used to wear them all the time with added lifts and a bit of a heel before the days I could trust good quality elevators. Since then I have kinda got out of the habit of wearing them because I like my elevators that I have bought over the past 4 years. But still think they are superb in terms of general appearance. And years ago I had always longed to find an elevator version.

So sat in that lounge thinking about this and waiting for my flight I was checking my e-mails – and to my amazement caught sight of the new range of GuidoMaggi Chelsea boots being flagged up. With heights up to 4” (10cm)! Fab. And it made me realise the tremendous way that they have of adding height while looking effortless.

For me, the most important thing adding height is that it should look effortless or let’s say almost accidental – as you probably know from my postings I have pairs of 6” boots (obviously entirely different to Chelsea boots!) and to my amazement even these I find if worn with the right things simply do not look like they are adding height – it’s part of the style and overall look (chunky boots with the right pants etc).

But Chelsea boots are just masterful at that even with a bit of a heel. Look at those shots of the Beatles in the 60s – their Chelsea boots had a pretty hefty heel but no-one took it as ‘adding height’. It was just a style. When you wear Chelsea boots, you almost get a free pass to add height without people thinking you are. So wear them with 4” extra height and it’s probably one of the best options to add that much height while looking totally natural.

When I wore Chelsea boots before I took to elevators, I would say that they were the footwear I took to most often for a good decade. And what I noticed was that always in every circumstances they fitted everything I had to do – I am not an office and suit guy, but on the occasions I did wear a suit I could wear them easily. And I noticed in that time that many guys I saw on the metro/tube who were obviously office workers and wearing them comfortably with the formal office wear.

In the 60s the long established general style of what we now call Chelsea boots was redefined for a look which swept the world and has remained with us on and off ever since.

Chelsea boots are that great rarity in fashion – something that suits every age and does not lose its status when seen on someone of ‘the wrong age’. The boots work every time. You know how some things acquire the dreaded ‘dad status’? Sorry, not wishing to be ageist but it is true. And then no-one under a certain age wants to be seen in them? Well with Chelsea boots it seems to almost be the opposite. Lenny Kravitz wearing them kinda sums it up – they always fit whatever he is wearing even when he goes a bit left field

For me, one of the great things about them was always the fact that they slipped on and off so easily. They are about the easiest thing to take off your feet outside of a pair of flipflops, and wearable enough to have on your feet all day. Plus you can wear the same pair with a suit and your jeans. Having that with an extra 4” of height seems to me to be the ideal option.

The other thing is the kind of silhouette the boots give you – now it’s difficult to describe this, but they seem to give you a shape and a form which is far more powerful and sexy than almost anything else. I would catch sight of myself in a long mirror and the overall impression was always improved by these boots. I think it’s because they make you walk easier and better and the worn with slim cut jeans they just look so so good. They almost form like part of the whole look.

If I went back a decade and was looking for my first pair of elevators as a guy then in my 20s, and if the Chelsea boots had been available then, I think it would have been a pair of these I would have gone for. Simply because of the versatility which made that first step a little less risky. How much added height? Well that’s down to you, although I went high straightaway, but I would just say you tend to get away with more added height in things like these boots.

If there’s one thing that I think a newbie to elevators will find the best it’s a good Chelsea boot.